Exploring the Viking Trail, Together June 2016

Greetings,
I have just returned from 9 days in Newfoundland and Labrador 'Exploring the Viking Trail' with 41 great travellers. This was a tour for women so there wasn't a great deal of sketching time as I had in Portugal when the group were sketchers travelling with Montreal Artist Marc Taro Holmes. The weather was rather inclement, making it difficult to stand outside without blowing away. Believe me even at my size it was hard to not get blown over. It was a wonderful experience and I must say the people of Newfoundland and Labrador are 5 star. They came to this island and many stayed, for many generations. They lived through the worst of weather conditions but shared the best of family and friendships.  They shared their music, their friendship and their history with us. I think everyone on this trip came home feeling that not only did they become an Honourary Newfoundlander by partaking in the ceremony of the Newfoundland Royal Order of  Screechers but that Newfoundland and Labrador will continue to be a special place to them. 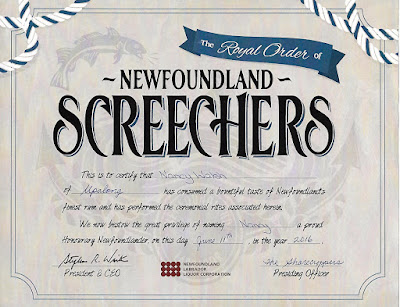 On day one I sketched from the bus as I have done in the past...what I called mini memories. The bus was bouncing, a lot! We headed to Gros Morne National Park which is named after the mountain shown below. The snow was still on the top. At Norris Point we took a boat along the coast to experience the coast line. How excited we were...too excited to sketch...when we saw a whale.


Bobbie was successful in capturing the whale in a series of about 8 photos. I hope that she will share so I can include them here. This is one of three I was lucky enough to get, I must admit I was so excited I forgot to take photos.